Autumn is here and Halloween is right around the corner.  I love Halloween, but not to happy about it being on a Wednesday this year.  Anyhow, today I will be expanding on explaining my Witch’s Cabinet.  A lot went into this Cabinet but it was worth it and I had a tone of fun putting it all together, with the help of my fiance of course. 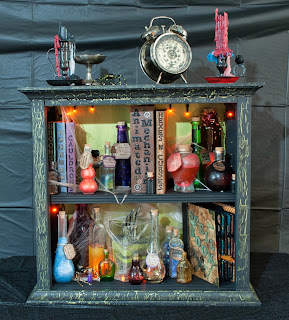 Cabinet: The cabinet itself is from an antique store 21″ tall,  22″ wide and 9″ deep.  I removed the doors and painted a green base coat.  I used regular glue (Elmer) as my next coat.  The glue is what makes it crackle.  A thin layer of glue will make small crackles and a thick layer of glue makes large crackles.  You paint the glue on and wait for it to get tacky, not dry and not too wet.  Once it is tacky, add a thick layer of paint, which mine was black.  Only one layer onto of the glue or you will cover the crackles with a second layer.  This technique I got off the internet. 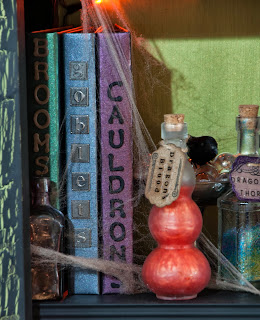 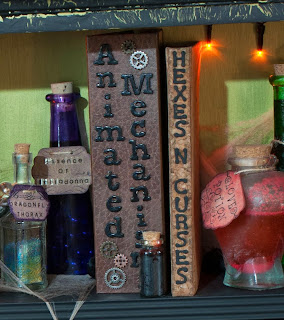 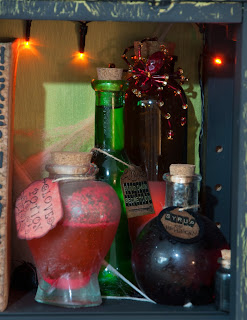 Potions: Some of the bottles are store bought and others are from an antique store.  I aged them with two techniques.  A painted a layer of glue, such as mod podge, on the outside of the bottles or I sandpapered the bottles or I did both.  The “potions” themselves are either corn syrup and food coloring or body wash and food coloring.  Some potions I added glitter to the corn syrup or body wash and some are just glitter.  The body wash, which I used was silver in color, gives it a nice shimmering look to them.  In addition, a couple of potions have marbles in them.  Lastly, I hand made tags that I inked and added sticker letters to, which I attached with rope. 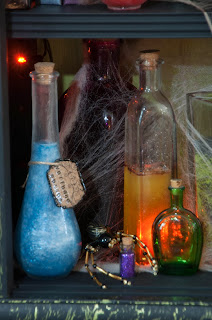 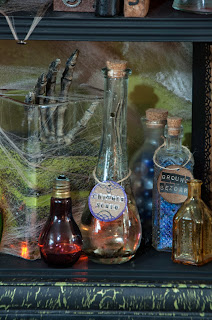 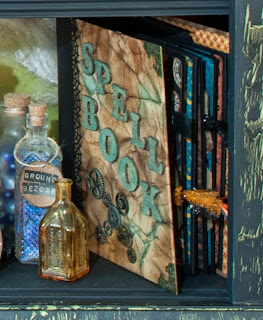 Books:  The books are mostly chipboard covered in paper with lettering attached.  The lettering I either inked or embossed in black.  One book is a journal from Michaels that I inked.  The Spell Book is the exception as it is the mini album.  More on that book in a day or two. 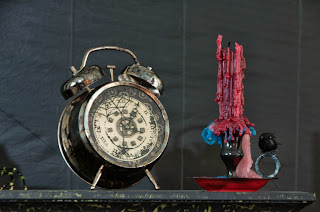 Lastly I added details such as candle holders with melted candles, beaded spiders, spiderweb – which i spray inked with a brown color so it won’t be so white, miniature crows, and lights.  The clock on the top is “Steampunk Spells Assembly Clock” which I previously posted on September 4, 2013.  The tutorial for that project should be up any day now.